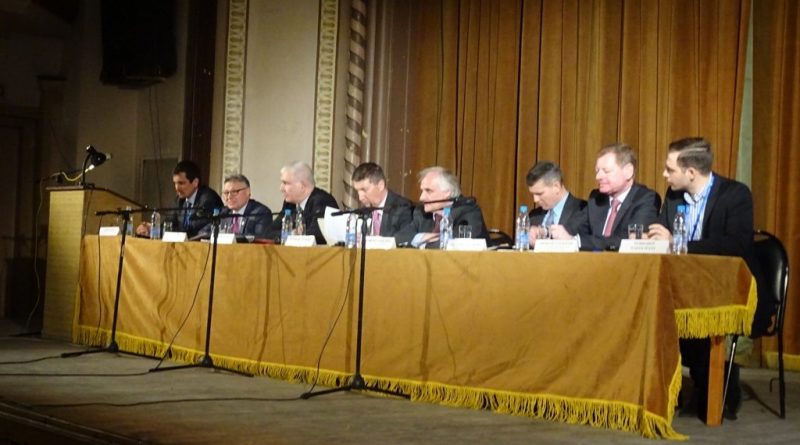 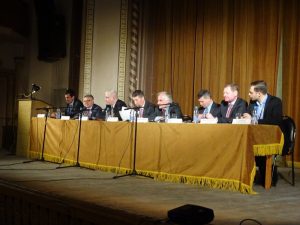 The aim of the conference “20 Years NATO Contribution to the Regional Security in Southeast Europe and the Black Sea Region: Bulgaria’s Perspective of the Chances and Challenges on the Way Ahead” was to contribute to the discussion on the NATO’s future and the challenges lying ahead for Bulgaria and the Alliance as a whole.  Noteworthy speakers took part in the panel discussion among which Mr Lyubomir Peev, Deputy Minister of Defence; Mr Stoyan Stalev, Minister of Foreign Affairs of the Republic of Bulgaria within February – May 1997; Mr Robert Pszczel, NATO Headquarters Representative; col. James Crowhurst, Defence Attaché, US Embassy in Sofia; Mr Thorsten Geissler, Head of the Konrad Adenauer Foundation in Bulgaria and Dr Velizar Shalamanov, Minister of Defence within August – November 2014. The event gathered at about 80 people from Bulgarian ministries and state agencies, NGOs, academia, student organizations and defence industry and media.

The beginning of the panel discussion was set by Mr Stoyko Petrov, George C. Marshall Association Bulgaria Acting Chairman who outlined the main topics for discussion such as the role of NATO in Southeast Europe and how we want to see Bulgaria in NATO for the years ahead, the significance of NATO, NATO Membership and the process leading up to it; NATO and Regional Cooperation; the Future of NATO. He defined Bulgarian membership in NATO as a fundamental foreign policy priority and a key factor for guaranteeing our security and sovereignty. He expressed his hopes that the event would generate a productive and lively discussion about the current realities and the opportunities for NATO and Bulgaria to reinforce the region’s deterrence and defence posture.

The participants discussed NATO adaption in response to the changes in the strategic environment reviewing its core missions and functions, starting from NATO 1.0 – collective defence, NATO 2.0 – partnership networks, NATO 3.0 – crisis management and NATO 4.0 – deterrence and collective defence. In line with NATO’s latest Strategic concept adopted in Lisbon in 2011, NATO continues to implement its three core functions: collective defence, crisis management and cooperative security. However, in NATO Warsaw Summit in 2016 a new focus was put to the historic objective of the Alliance to deter and defence its Allies from an external threat that raise the question on the future of NATO – NATO 4.0 and what does that mean for the Black Sea Region. Another key issues that were addressed were: NATO enlargement in Southeast Europe and understanding of NATO membership and the role of NATO and allies for regional cooperation in Southeast Europe / Black Sea region.

During the panel session, Mr. Stoyan Stalev, Minister of Foreign Affairs of the Republic of Bulgaria within February – May 1997, stressed the importance of having a consensus between the major parties on foreign policy issues.  It was mentioned that NATO has already taken some significant steps in order to create а more comprehensive defence infrastructure in the Black Sea region. It was stated that if the member countries have the will to work together, if each one is determined to be an active real coworker in the collective defence, then we will all have a greater advantage as a stable Alliance which consists of strong participants in the events on a world scale.

It was stated that Bulgarians as a society have to understand and realize the real meaning and benefits of being a part of the Alliance. To be a full member state is not a simple impulse but a conscious choice and a choice of certain values. And the results of this choice shows that the membership of Bulgaria certainly helps to strengthen the Southern flank of NATO as well as to enhance the security in the Balkans. What is important to be noted for understanding NATO as an organization is that NATO is a defensive alliance, designed for deterrence and defence therefore it is considered as a highly adaptive alliance.

The panellists underlined that membership in NATO doesn’t include only the military and the security sector, but the whole spectrum, also the economy. We should not underestimate the economic benefits of Bulgarian membership in NATO – the business, the market economy and the foreign investments can only be attracted in a secure environment. NATO is undoubtedly the main instrument for building confidence, supporting institutional development, continuing economic growth, modernization of a country.

Mr. Robert Pszczel, NATO HQ Representative, discussed what Bulgaria brings to NATO.  He gave a positive evaluation –“quite a lot”, he said, mentioning that Bulgaria is politically a very important contributor to NATO. Mr. Thorsten Geissler, Head of the Konrad Adenauer Foundation in Bulgaria, also showed that the efforts of countries like Bulgaria and Romania, which invest in the military and are modernizing their armies are appreciated and he expressed his gratitude for them.

The participants in the panel session united around the idea that NATO is one of the most successful peace projects in the world that we could further develop. Dr Velizar Shalamanov underlined that there is a very strong link between NATO and the EU and a very strong transatlantic link. NATO has been a platform for stability because of democratic countries with common values and peace as an important goal. Mr. Geissler expressed his belief that democracy and peace will prevail, but we should work for them every day, day by day.

The panelists also discussed how they see the development of NATO in the context of multinational cooperation and joint development of capabilities, the opportunities of Bulgaria for future participation in more international formats, how Bulgaria could play more important role in NATO.  Robert Pszczel noted that predicting the future is a difficult task, so it is important to invest in the development of capabilities. We may not know exactly but if we want to have a multipurpose, multinational, well-tested, with all the political back up cooperation we have to invest. The participants stressed on the unique cooperation and solidarity. Col. James Crowhurst, the Defense attaché from the US Embassy in Bulgaria, talked about what Bulgaria could do in NATO, its modernization efforts, and how it could have an impact on the counterterrorism efforts.

Mr. Lyubomir Peev, Deputy Minister of Defence of the Republic of Bulgaria, assured that Bulgaria will demonstrate its readiness, capacities, and capabilities, which are established and continue to be developed, and that Bulgaria is committed to being an active and respectable member of NATO. “We must create a sense of belonging to an alliance of equality and a sense of security for the Bulgarian citizens”, he pointed. The series of international exercises that will take place are practical applications of the fact that the Alliance is ready for joint actions. Mr. Lyubomir Peev stated that the international exercises “Saber Guardian – 2017”, “Trident Jaguar – 2017” and “Noble Jump – 2017” are in the focus of the Bulgarian Ministry of Defence.

The panelists also commented on the opportunities for deeper cooperation in areas of cyber defence. They underlined that populism and nationalism are on the rise and we must fight them. The participants discussed how people can distinguish between fake news and facts. Mr Pszczel suggested some practical advices in connection with disinformation: to check the source, to look for the sign and whether the information is credible.

Another subject, discussed at the panel was proxy wars. Dr Shalamanov focused on NATO force integration units as the best instrument for addressing any risks and threats, including hybrid warfare and proxy wars. It depends on how we are using this instrument. The presence of multinational formations is changing and actually activating this solidarity that we are talking about in a very practical way. The new established Assistant Secretary General for Intelligence and Security is just to facilitate the trustful sharing of information. That is the main instrument to address this type of threats.